What’s my part number and approval?

Where can I find specifications for products & accessories?

All datasheets can be found at ffeuk.com go to the Fireray tab and select beam type, then go to resources and then datasheets.

Which Beam detector do I choose?

What applications are suitable for beam smoke detection?

You must have the correct ‘line of Sight’ to align a Beam. 1m diameter for the Reflective types 600mm diameter for the End to End (this can be less under certain circumstances). The Risk Area should ideally be enclosed from the outside world, have no air born contamination and have wide temperature fluctuations.

Where can I install a reflective beam smoke detector?

Where can I install an end to end beam smoke detector?

If you cannot archive the guidelines for the Reflective type, the End to End should be used.

What applications are NOT suitable for beam smoke detection?

Areas which are open to the outside world, have lots of air born contamination or large temperature swings should be avoided when using Beams. Strong sunlight can cause false alarms for older Beams in the FFE range.

I have a wireless fire system and want to use beam smoke detectors. What do you recommend?

Any FFE Beam can be connected to a Wireless interface.

What distance can a beam smoke detector cover?

Can I paint a beam smoke detector to be more discrete in my installation?

In short, no. Our Fireray detectors are not designed to be painted, as there is a risk that paint could adversely affect the plastics and electronics over time. However, we are aware that our product needs to work alongside your buildings so, as an alternative, it is possible to use a façade to easily hide our Fireray detectors while also allowing for maintenance access to the devices.

How and when should I clean a beam smoke detector?

Using a NON-ABRASIVE CLOTH, gently wipe the prism and detector of any dusty or otherwise contaminated surface. As a feature within all Fireray products, a fault will appear on the device if contamination reaches a level that it is not able to operate. These faults differ between models, so we recommend you check the appropriate user manual for more details.

What is the warranty period on your products?

How many beams can I connect to a controller?

2 Detectors/Beams to the Fireray 3000 and Fireray 5000 Controllers. The new Fireray Hub can have 3 Detectors/Beam both Reflective and End to End on the same set up.

What type of cable do I need?

Installations are often specified to be fireproof rated cabling in most cases. You can use 2 core cabling for power supply wiring and 2 core cabling for the relay output connections. If you only have access to 4 core cabling this can be used also, but double up on the cores. Spare cables should not be left floating.

What is the maximum cable length between the detector and controller?

Using FP200 you can have a maximum of 100m between the Detector and Controller. This is only 80m using USA spec cable.

What tools should I have to install, test and maintain beam smoke detectors?

Ideally you need the ‘Beam Test Kit’, but this is not essential. What is essential is the ability to block the Beam at either the Reflector or Receiver end depending on the type of Beam.

What can cause interference on beam smoke detectors?

A strong Infra-Red source from another Beam, Sunlight or Beacons/Strobe lights can affect a Beam, but only if this source is directly on the Detector/Receiver.

How do I know how many beam smoke detectors I need for an installation?

You need to know the length, wide and (if over 25m) the height of the risk area. A Beam can cover a width of 15m (which can rise to 18.75m in certain circumstances).

To maintain the clear line of sight I need to install the beam smoke detector further than the maximum 600mm from the ceiling stated in the standard of BS5839 Part 1. Is this ok?

If you cannot achieve the guidelines for Installation of Beams in BS5839 part 1, you need to declare this a ‘variation’ of the standard. For this to be accepted, all interceded parties must agree.

How close can I space my beam smoke detectors?

They can be placed between 10-15 meters (33-50 ft.) apart assuming the ceiling is flat. Placing beam smoke detectors closer than 10 meters (33 ft.) increases the risk of interference resulting in false alarms or faults on your system.

How should I power my Fireray?

We recommend all our Fireray beam smoke detectors are powered through a dedicated 24V dc 1 Amp power supply. A 5 Amp or greater rated power supply is recommended if you need to support prism (reflector) and detector heaters, to combat condensation.

We do not recommend using our products through the zone connections on the fire panel unless you are using a zone powered beam smoke detector.

How do I know my Fireray detector is working?

Each of our Fireray models have an Amber or Green LED which will flash every 8-10 seconds to visually confirm normal operation, either on the detector and/or controller.

Fireray One: A Green LED flashing means the Beam is working, an Amber LED flashing every 3, 5 or 10 seconds indicates a fault.

The beam won’t align. What do I do?

How do I wire to the Fire Panel?

The beam won’t go into Fire or Fault when tested. What do I do?

My customer has beam smoke detectors installed on their site, and I don’t know much about them. What should I do?

You can visit www.ffeuk.com and view our user guides and case studies to learn more about beams in certain applications. Or see our Fireray Pocket guide.

How do I test a beam smoke detector?

When testing, ALWAYS test your beam smoke detector at the reflector or transmitter end of the system.

Completely cover the reflector or the transmitter, depending on the model you have – using a non-reflective material – such as a piece of cardboard, or foam. If your beam is aligned correctly, it will go into FAULT condition. 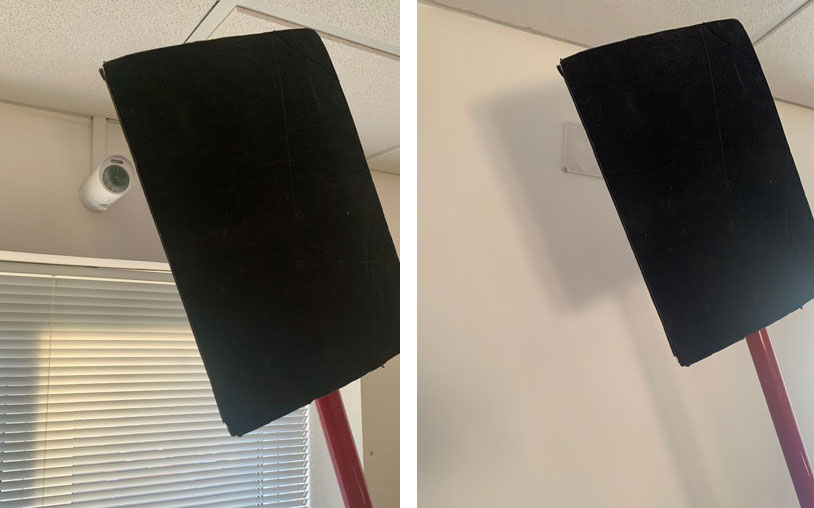 The beam won’t go into Fire or Fault when tested. What do I do?

What could be causing a false alarm?

There are multiple reasons for a Beam of any kind to false alarm and the types of reasons are listed below. The 3 LED version of the F5000 Controller has an Event Log which can be used for fault finding. At present, this is the only FFE with an Event Log.

Dust/Mist: As a rough rule of thumb if your eye can see something, the Beam can too. So, a site which has a lot of dust up in the roof space where the Beams are can trigger false alarms. Similarly, if the site is not sealed for the outside world, mist can form in the roof space and trigger a false alarm. To a Beam, both dust and mist will appear as smoke as they attenuate (reduce) the Beams signal.

Condensation: Any moisture which forms on the lens of the Reflectors of a Beam can cause the Beam’s signal to drop below the Fire Threshold and cause an alarm. Since the moisture can evaporate quickly, this type of False Alarm can be hard to detect. I will usually occur at colder times of the year and hot during the warmer months. FFE make heaters for Detectors and Reflectors, but these may need an extra power supply.

Building Movement: Ideally, you should always use a solid surface to mount a Beam on. If the surface moves, then it is not suitable for a Beam. If it holds the building up, brickwork, steels in the roof space, it is good to use. Remember – the longer then Beams run, the more important the solid surface becomes. Over 100m, 1 degree of movement at one end is nearly 2m at the opposite end of the building. If you have a brick wall and a plaster board wall, always put the Detector or Transmitter on the Brick wall and the Reflector or Receiver on the plaster board wall. This is because both the Reflector and Receiver can tolerate move movement before it affects the Beam’s signal than the Detector or Transmitter.

Obstructions: Anything that can block the path of a Beam can cause a False Alarm. This can be people, a temporary structure or most commonly, a pallet on the top of a rack. Again, a pallet blocking a Beam can be removed before the Fire Alarm Engineer has seen it and this can lead to confusion about the cause of the alarm.

Sunlight: The older Beam designs are False Alarmed by sunlight shining directly onto either the Detector or Receiver. Sunlight passing through the Beam is not a problem. Thought needs to be given when using Beams in areas with lots of glass as reflected sunlight can also False Alarm older designs. Newer Beams have LCT (Light Cancellation Technology) which will not False Alarm because of the sun.

Poor Manual Alignment: If a Beam is manually aligned, the skill of the Engineer setting the Beam up will have a crucial impact on the long-term performance. A poorly aligned Beam may not go wrong for a few weeks of months, but this combined with a not so solid mounting can end up with the Beam False Alarming. So, with a manually aligned Beam, the Engineer needs to follow the manual and or watch the training video to get the best possible Alignment of the Beam.

How do I reduce false alarms on beam smoke detectors?